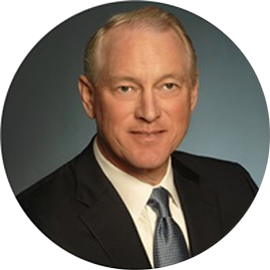 Robert, Senior Vice President of 360 Financial, has 22 years’ experience in providing financial and advisory services to clients. Prior to joining 360 Financial in 2015, Rob spent 15 plus years as a Senior Vice President in the Global Wealth Management Group at Merrill Lynch. Prior to that, Rob spent 4 and a half years as a Vice President at US Bank’s Private Financial Services Group. Throughout the years, he has gained invaluable experience advising on trust accounts, along with taxable accounts and other forms of qualified plans. Rob is a graduate of The University of Minnesota, holds FINRA series 7 and 63 securities registrations as an Investment Advisor Representative of LPL Financial. Rob was named a Five Star Wealth Manager in 2013, 2014, 2015, 2016, 2017, 2018, and 20191.

Rob and his wife Nancy reside in Eden Prairie, MN. They have two adult daughters, Lauren and Julia. Rob enjoys all forms of outdoor activities, and is involved in Bible Study Fellowship at Wooddale Church in Eden Prairie. He and Nancy have been members of Christ Presbyterian Church of Edina since 1989.

1 Award based on 10 objective criteria associated with providing quality services to clients such as credentials, experience, and assets under management among other factors. Wealth managers do not pay a fee to be considered or placed on the final list of 2013-2018 Five Star Wealth Managers.

The information being provided is strictly as a courtesy. When you link to any of the web sites provided here, you are leaving this web site. We make no representation as to the completeness or accuracy of information provided at these web sites. Nor is the company liable for any direct or indirect technical or system issues or any consequences arising out of your access to or your use of third-party technologies, websites, information and programs made available through this web site. When you access one of these web sites, you are leaving our web site and assume total responsibility and risk for your use of the web sites you are linking to.